My track Corsa - and so the season ends... 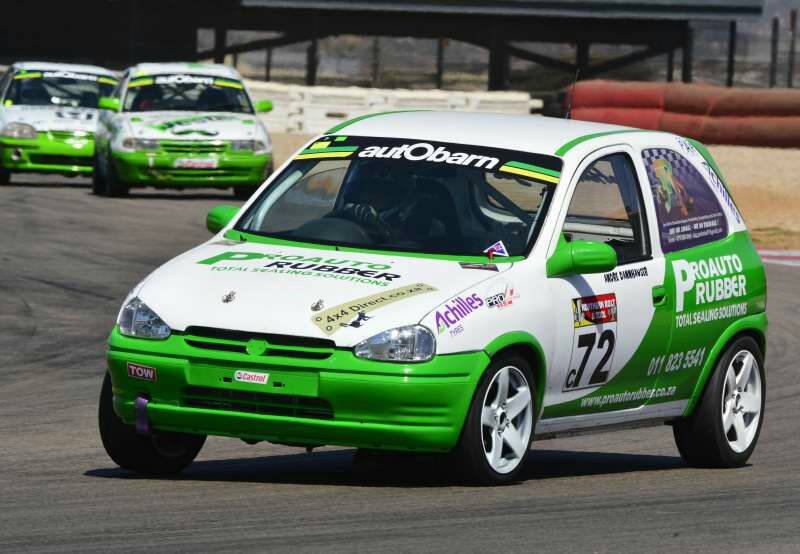 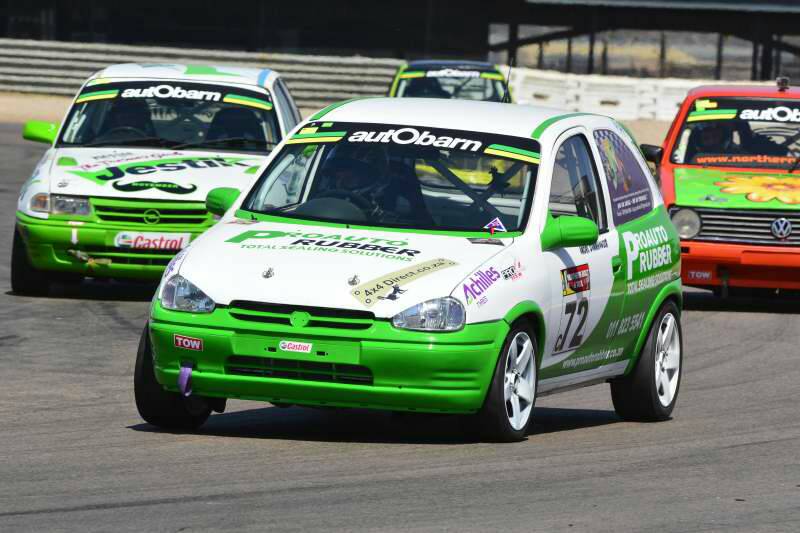 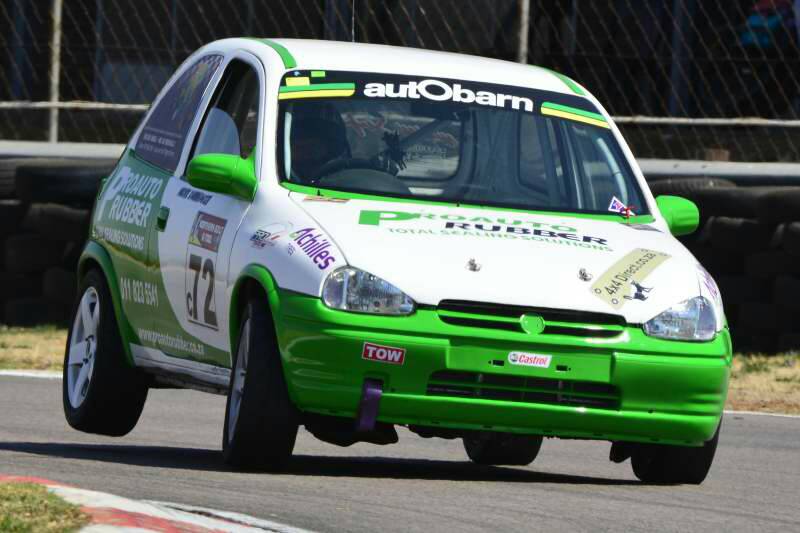 Well done on the win Andre!

Considering the abuse the car goes through, its a big achievement that this is the first DNF.
Real drivers use three pedals

Getting better and better each time. Each time you sort out more problems and the list is getting shorter. At least this time you do not have huge repairs before the next race. Almost there! Well done!

Only Dead Fish Go With The Flow!

Yeah if things go well at Kyalami, I might just wrap up the class C championship

Questions: Why are all the cars the same colour scheme?
Only Dead Fish Go With The Flow!

Yes it is kinda weird all the white and green cars huh?

Some footage from Tyler:

The day finally arrived – the last race of the year. I got to Zwartkops early on Friday morning, car prepared and heart racing. We went out for the first practice session with lovely sunshine and moderate temperatures. I managed a best time of 1:18.7 which was 0.3s slower than Tyler. I knew Tyler was on fire for the weekend, so it was going to be tough to catch him.

In the second session I managed a 1:18.7 again – this was fastest in class, but now Robyn was also starting to show some impressive lap times. I knew that I could expect a mammoth battle in the race from Tyler and Robyn. It was always going to be an interesting battle with the three very different cars.
For our last session the rain arrived, but there was no way I was going to miss the opportunity to get some laps in on the wet track. I just did my best to keep things as smooth as possible, looking for grip as far as I went. My lap times were very consistent, and managed to stay on the tar the entire session. We packed it all up and called it a day.

Saturday
First order of the day was qualifying. Although we knew we would have an inverted grid based on the Kyalami results, the fight was still on to try and get the fastest qualifying time. Tyler was flying, managing a time of 1:18.2. I just could not get close to the time he posted, and only managed a 1:18.6, with Robyn setting a time of 1:19.2. .
This was really shaping up to be quite a race – Tyler with his outright pace, Robyn with the super-nimble little Ford Ka and wealth of experience, and me… Bring it on!

Race 1
With the inverted grid, we had Jaen on pole, Alta 2nd, myself in 3rd, Tyler 4th and Robyn 5th. When the lights went out I managed to get a great start, taking the lead and also passing one class B car before we reached turn 1. We all managed to get through turn 2 without incident, and the chase was on. I just pulled my ears back and did all I could to get away from the chasing pack. I could see Tyler and Robyn making progress through the field, and soon enough they were clear and chasing after me. Robyn kept Tyler really busy, which counted in my favour – they were closing the gap, but slowly. With 2 laps to go I had the both of them right on my tail, but managed to keep them out to the flag. When we crossed the line the gap between 1st and 3rd was only 0.9s, with Tyler in 2nd and Robyn in 3rd. I was completely overjoyed at the win – never really expected it.

Race 2
With the grid reversal, the lineup was Jaen on pole, Alta 2nd, Robyn 3rd, Tyler 4th, and myself in 5th. We also had three Polo TSi’s behind us as part of the VW driver search, and these youngsters had everything to go for. The lights went out, and I did not have a great start. As we went through turn 1 I saw a massive dust cloud, and I was worried that a car might appear from that cloud in front of me, so I backed off a touch. Immediately two of the Polo’s came flying past, and I knew I had a lot of work to do. I managed to clear the Polo’s on the way to turn 4, and set about chasing Jaen down. On the last turn of lap 1 I managed to squeeze past Jaen and set about catching Alta. I was desperate to get past her as soon as possible, and tried to pass her on 3 occasions when it was never really on. My impatience cost me quite a bit, as I was stuck behind her for two laps. Full marks to her for putting up a good clean fight though! I finally got past her at turn 5 on lap 3, and now I had to work really hard to get after Tyler who was in 2nd position, battling it out with Robyn who drove smartly to keep him at bay. I slowly closed the gap, and on the second-last lap I was getting very close. Unfortunately for Tyler he spun out in turn 5, and ended up standing still in the middle of the track. I backed off for a bit to safely navigate my way past him, and set after Robyn who was quite a bit ahead of me now. I drove as hard as I could on that last lap, and actually managed my best lap time for the weekend, pulling a whole second back on Robyn. It was however too little too late, as Robyn took the flag for a brilliant win, with me finishing 2nd and Alta 3rd.

It was truly an amazing season. There were the moments when things did not go well, having had a rather serious crash and also one DNF due to mechanical failure, but at the end of it all I walked away as class C champion, racking up 9 wins in the process.

There are so many people to thank, but I’d like to just mention some specific people.
Pro Auto Rubber - Hennie and the team - Thank you so much for your support this year. It really means so much to me that you backed me through thick and thin. It is such an honour to have your company’s name on my car.

JR Panel & Paint - Koos, thank you so much for all you have done this year. The late nights to repair the car after the ‘Oops’-moments, the dedication, and words of encouragement. Thanks to your efforts the car was always one of the best looking cars at the track.

4x4 Direct - Thank you so much, Pieter and Niel for bringing the light in the darkest hours of this year. You really saved the day.

autObarn - Terry, thank you so much to you and your team for all you have done for every single competitor in Superhatch. Without you we would have had a very dismal year.

Northern Bolt & Tool - Fred and Gillian – you guys are so amazing. Thanks for all the words of encouragement, the advice and always being there. It is so amazing that every single time we come off the track, you guys are there with the biggest smile and the warmest congratulations for every competitor.

ASAP - Oom Willem, thank you for all you do for every one of us. Always willing to help, even when it was not asked. You are such an inspiration.

ProTek Performance - Thanks so much for the help in setting up the car, Hilton. The help you have given was more valuable than words can describe.

DynoHolics - Sammy, thanks for finding those ponies that were running wild in the hills and putting them in the engine bay – you are a star!

Tyler Scott - Buddy, thanks for the season. Thank you for making me fight for whatever I wanted on the track. It was so amazing to have you – the guy fighting me for the same championship – help me to go faster. The effort you have put in is just unbelievable. Thank you so much again.

My precious family - The biggest thanks have to go to you. Thank you so much for allowing me to chase my dreams. Thanks for your sacrifice, your support, your prayers. I love you all so much…
Nothing is impossible - it just costs more
Top

Dankie, Chris!
Nothing is impossible - it just costs more
Top

Thanks, Froll!
Nothing is impossible - it just costs more
Top

Now to get ready for next year ...

Not a lot of changes planned for next year. Will be moving up to class B, but in all probability still with the same engine. I'll just take all the weight out of the car, and see if we can get some more ponies somwhere - short of about 4kw at athis stage (doubt we'll get it though)

So a whole new challenge for next year!
Nothing is impossible - it just costs more
Top

You called, Andy? At your service.

Indeed very well done, Andre, you certainly have something to be proud of!

First of all, well done Andre

Second of all now you have the two old toppies confused

Not all those who wander are lost!

Oh ja - we had our YEF on friday

Best presented car for 2016! Very chuffed with that :)
Nothing is impossible - it just costs more
Top

Second of all now you have the two old toppies confused

Return to “Build your own:”

Jump to
Powered by phpBB™ • Design by PlanetStyles